As Elasticsearch is gradually becoming the standard for textual data indexing (specifically log data) more companies struggle to scale their ELK stack. We decided to pick up the glove and create a series of posts to help you tackle the most common Elasticsearch performance and functional issues. This post will help you in understanding and solving one of the most frustrating Elasticsearch issues – Mapping exceptions.

What is Elasticsearch Mapping?

Mapping in Elasticsearch is the process of defining how a document, and the fields it contains, are stored and indexed, each field with its own data type. Field data types can be, for example, simple types like text (string), long, boolean or object/nested keys (which support the hierarchical nature of JSON).

Field mapping, by default, is set dynamically, meaning that when a previously unseen field is found in a document, Elasticsearch will add the new field to the type mapping and set its type according to its value. For example, if this is our document: {“name”: “John”, “age”: 40, “is_married”: true}, name field will be of type string, the age field will be of type long, and the is_married field will be of type boolean. When the next log, containing any of these fields, will arrive, our Elasticsearch Index will expect the log fields to be populated with values of the same types as the ones that were determined previously in the initial mapping of our Index.

But what if it didn’t?

Basically, the mapping determination is a race condition, the first key type to arrive an index determines that key name type until the next index is created. Let’s take this log for example, {“name” : {“first“ : “John”, “second“ : “Smith”}, “age” : 40, “is_married” : 1}. The field “name” is actually a JSON object and the field “is_married” is now a number, this will result in the log causing two different mapping exceptions. The log, in this case, will be discarded without being Indexed in Elasticsearch at all. We can consider this as data-loss, without having any indication of that incident besides the Elasticsearch log files, which will contain a mapping exception for each log (also impacting the cluster performance).

These scenarios happen more frequently when different programmers are working on the same projects, printing logs with the same fields names, only they are using a different set of values. How do we handle these mapping exceptions when we encounter them?

For starters, what you do not want to do is to manually change the type of the exceptions field (in our case ‘name‘) to object, existing field mappings cannot be updated. Changing the mapping would mean invalidating already indexed documents. Instead, you should create a new index and then separate the ‘name‘ key to separate fields for strings and objects. E.g, assign objects to ‘name_object‘, and strings to ‘name‘. Thus, the mapping of the new index will have the two keys ‘name‘ and ‘name_object‘ which populate strings and objects respectively.

How we handle Mapping exceptions in Coralogix

Coralogix handles numeric Vs string mapping exceptions by dynamically adding a .numeric field to keys containing numbers that previously mapped as a string.

In case Coralogix encounters a mapping exception it can’t handle (e.g Object Vs String, number Vs boolean, etc.), it stringifies the JSON and puts it under a newly generated key named ‘text‘. In either case, you won’t lose your data as a result of an exception.

These are the actual messages ‘coralogix.failed_reason‘ key holds when a log input causes a mapping exception, and they tell us the story of what went wrong and of course, help us fix it.

From this message we can infer that ‘data’, which is a nested key within ‘results’, was initially mapped as an object and later arrived, numerous times, with a value of type string.

How can we fix the issue so the next log that will arrive with a string as the value for ‘data‘ won’t trigger an exception?

Coralogix offers a parsing rule engine. Among other useful parsing options, you can find the ‘Replace’ rule that enables the user to replace a given text, using REGEX, with a different one before the log is getting mapped and indexed in Elasticsearch. What we would like to do is to use Regex and match any log entry that contains the ‘results.data‘ field as an object (starts with an opening curly bracket) and replace ‘data’ with’data_object’. Any similar occurrence from this point will assign the object to the new key ‘results.data_object‘. This new key was created and added to the mapping of our index on the arrival of the first entry that matched after applying our rule. This is how our rule would look like in Coralogix:

If we are not sure of which rule to configure we can use the Coralogix ‘Logs’ screen to run some queries and see the valid logs and the logs which encountered a mapping exception. 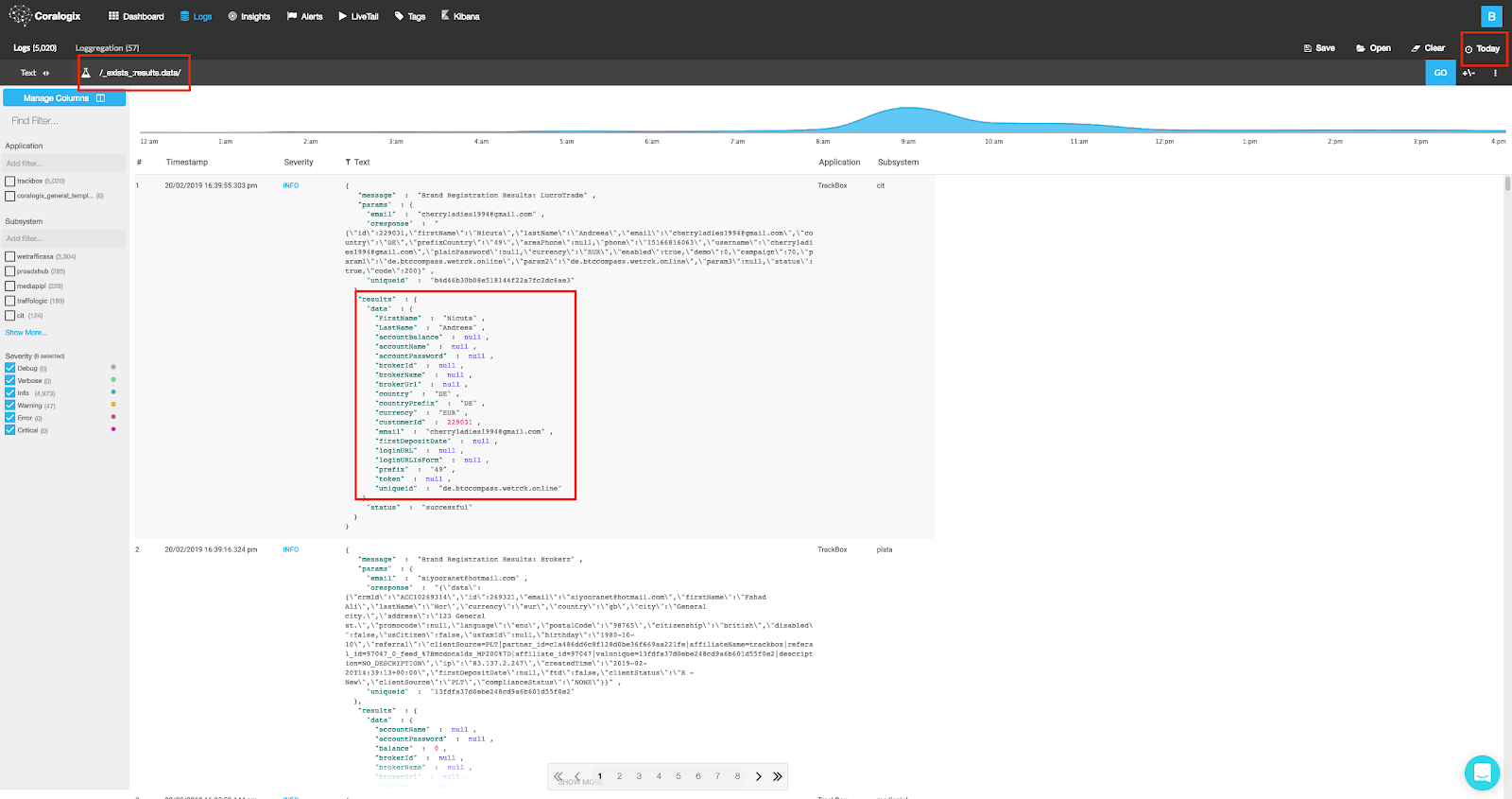 Run the following query: /_exists_:results.data/, and you should retrieve logs with an existing (meaning correctly mapped) results.data field, we can easily notice that all of these valid logs present a JSON object within results.data. 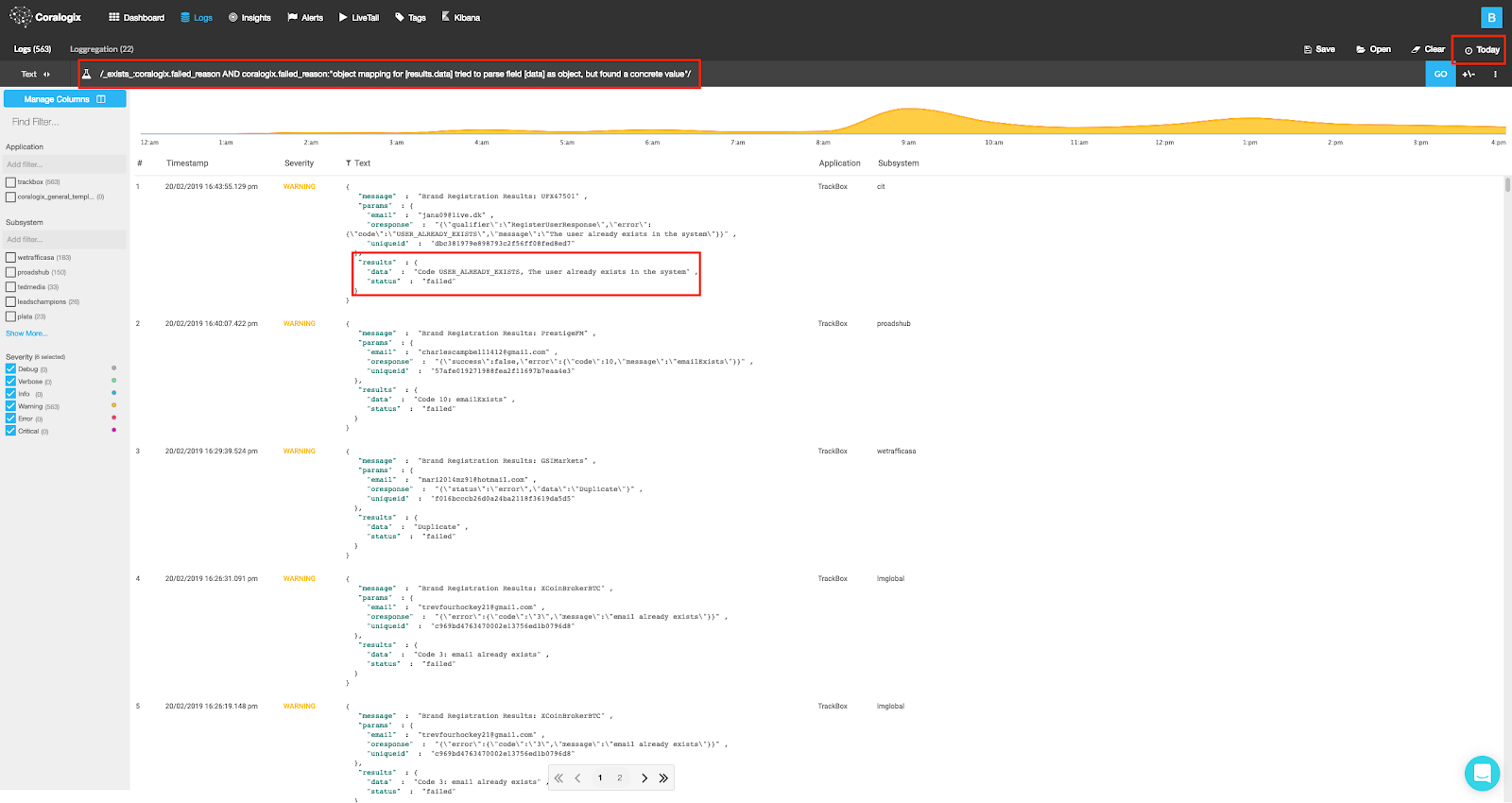 The query: /_exists_:coralogix.failed_reason AND coralogix.failed_reason:”object mapping for [results.data] tried to parse field [data] as object, but found a concrete value”/, will show us logs that encountered the specific mapping clash found in our Coralogix Mapping Exceptions Dashboard, confirming our analysis. 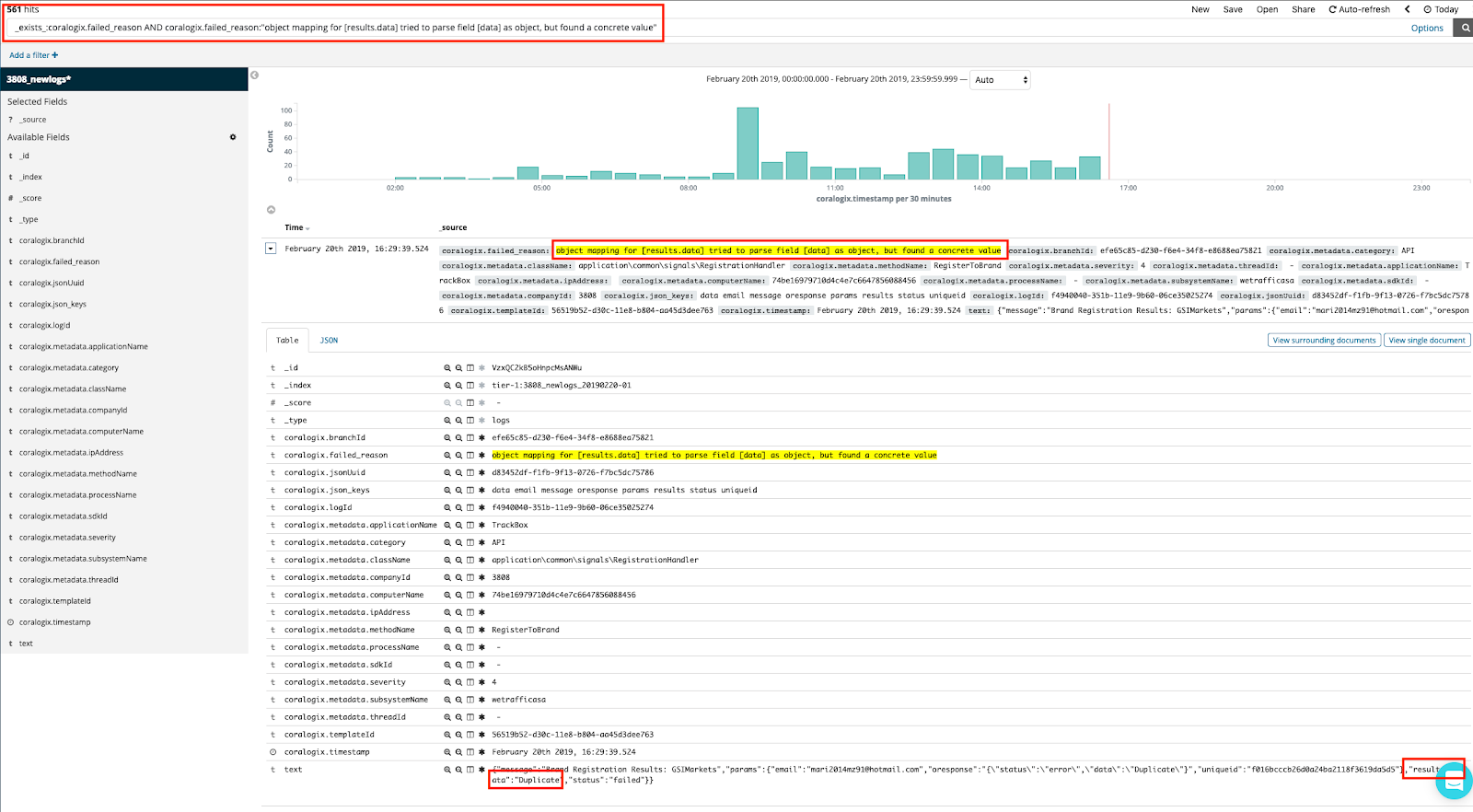 Running the same query (without the ‘/’ slashes) in Kibana, (_exists_:coralogix.failed_reason AND coralogix.failed_reason:”object mapping for [results.data] tried to parse field [data] as object, but found a concrete value”) will retrieve logs that failed to be mapped by Elasticsearch. We can see that the entire JSON payload of the log was stringified and stored into column text, verifying the fix action we should take.

Let’s take another example of an exception message: “failed to parse [response]”. We’ll encounter such exception in either of the following cases:

We should definitely take Mapping exceptions into consideration as they can cause data losses and dramatically reduce the power of Kibana and the Elasticsearch APIs. It is recommended to develop best practices across different engineering teams and team members so that logs are written correctly and consistently, or at the very least, choose the right logging solution that will give you tools to handle such issues and get your data on the right path.