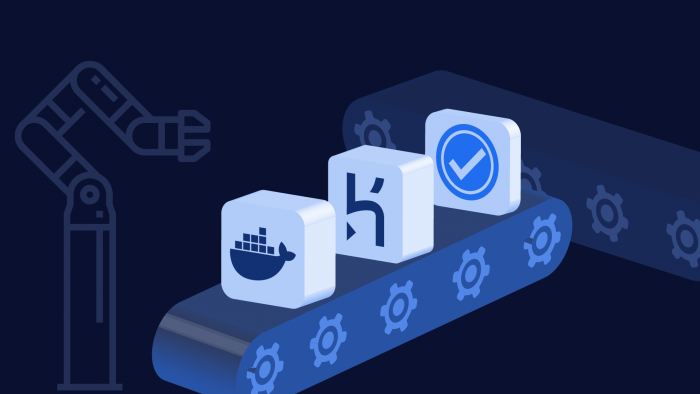 In this tutorial, we will be using Heroku to deploy our Node.js application through CircleCI using Docker. We will set up Heroku Continuous Integration and Deployment (CI/CD) pipelines using Git as a single source of truth.

Containerization allows developers to create and deploy applications faster with a wide range of other benefits like increased security, efficiency, agility to integrate with DevOps pipelines, portability, and scalability. Hence, companies and organizations are largely adopting this technology and it’s resulting in benefits for developers and removing overhead for the operations team in the software development lifecycle.

Benefits of having an Heroku CI/CD pipeline:

To complete this tutorial you will need the following:

The application architecture is always fundamental and important so we can properly align our various components in a systematic way to make it work. Let’s define the architecture of our example application so that we can have a proper vision before writing our code and integrating CI/CD pipelines.

We’ll be using Docker to deploy our Node.js application. Docker provides the flexibility to ship the application easily to cloud platforms. We will be using CircleCI as going to be our Heroku Continuous Integration and Deployment tool where we will run our unit and integrations tests. If tests are passed successfully, we are good to deploy our application on Heroku using Container Runtime.

You can fork and clone the repo and setup Node.js application locally by running the following–

Our application uses Redis for storing key/values pairs so if you have Redis locally installed and running, we can test this application once locally before dockerizing it by running the following command:

Let’s browse our application by opening the URL http://localhost:3000/ping in the browser. If we don’t have Redis configured locally, no problem, we have your back. We will be running this application using Docker Compose locally before pushing it to Git.

This is our own Node.js application and there is no Docker image available right now so let’s write our own by creating a file named `Dockerfile`.

We will be using an official node:14-alpine image from Dockerhub as our base image. We have preferred the alpine image because it’s minimal and lightweight as it doesn’t have additional system packages/libraries which we can always install on top of it using the package manager.

Note: I am also running `npm update` along with `npm install`, it’s not generally a best practice to run `npm update` as it’s possible that it might break our application due to some updated dependencies while running in production which can result in downtime.

Also, we will be setting up our Heroku Continuous Integration pipeline where we will be running our integration tests and code linting where such issues can be caught before deploying our application.

The output will be something similar as shown in the image below:

We can now run our application container using the image created above by running the following command:

We can see the output as shown in the image below–

Oops!!! We’ve dockerized our Node.js application but we haven’t configured Redis yet. We need to create another Docker container using the Redis official docker image and create a network between our application container and the Redis container.

Too many things to take care of, so here comes Docker Compose to help. Compose is a tool for defining and running multi-container applications with ease; removing the manual overhead of creating networks, attaching containers to the network, etc.

We have defined our two services named `web` for our Node.js application and `db` for our redis.

Add the following variables to the .env file

It is always recommended to store the sensitive values or credentials in `.env` file and add this file in `.gitignore` and `.dockerignore` so we can restrict its circulation.

Let’s create a `.gitignore` and `.dockerignore` file and add the following–

Let’s browse our application and make some dummy request to save data to our redis service.

We have successfully saved our data in our redis, Let’s make a get request to `/dummy/1` to check our data–

Note: We can use Postman to make an API request.

Before moving forward, let’s discuss the pros and cons of Heroku Container Runtime

Heroku traditionally uses the Slug Compiler which compresses our code, creates a “slug” and distributes it to the dyno manager for execution. This is a very common understanding of what Slug Compiler does. With the increase in the adoption of Containerization and the benefits of it, Heroku has also announced Heroku Container Runtime which allows us to deploy our Docker images.

With Heroku Container Runtime, we can have all the benefits of Docker like the isolation of our application from the underlying OS, increased security, flexibility to create our custom stack. With Docker, we have an assurity that the application running inside the container on our local machines will surely run on the cloud/other machines, as the only difference between them is of the environment i.e config files or environment variables.

Similar to this popular quotes, We have more responsibility to maintain and upgrade our Docker image, fixing any security vulnerability, unlike the traditional slug compiler. Other than that, Heroku Container Runtime is not yet mature as it doesn’t support most of the cool features of Docker. These are some of the major missing features that we use with Docker —

We will be using Heroku Container Runtime for deploying our application along with Heroku Manifest. With Heroku manifest, we can define our Heroku app and set up addons, config variables, and structure our images to be built and released.

As we are using Redis to store key/value pairs, we can define the Heroku Redis add-ons. Under the `setup` field, we can create global configurations and add-ons. Under the `build` field, we have defined our process name and the Dockerfile used to build our Docker image. We can also pass build arguments to our Dockerfile under the `config` field. We haven’t used the `release` field as we are not running any migrations or pre-release tasks. Finally, we have defined our dyno and command to be executed in the `run` field.

Note: If we don’t define the `run` field, the CMD command provided in Dockerfile is used.

Let’s create our app on Heroku. Hope you have installed the Heroku CLI and installed the `@heroku-cli/plugin-manifest` plugin. If not, please refer to this doc.

Awesome, we have created our app on Heroku, it has also set our stack to a container. Let’s move to the next section and create our CI/CD pipeline to deploy our Node.js Application.

Continuous Integration (CI) is the process of automating the build and running all our test suites including unit tests, integration tests and also performs code validations and linting to maintain the code quality. If our code successfully passes all the checks and tests, it is good to be deployed to production.

We will be using CircleCi for creating our Heroku CI/CD pipelines. CircleCi is the cloud-based tool to automate the integration and deployment process. Heroku also offers CI/CD pipeline but as we discussed above, Heroku Container Runtime is not very mature and still under development and hence, it is not possible to test container builds via Heroku CI. We can use other third-party CI/CD tools like Travis, GitHub Actions etc.

CircleCI has recently introduced reusable packages written in YAML called “Orbs” to help developers with setting up their CI/CD pipeline easily and efficiently. It also allows us to integrate third-party tools effectively in our pipelines. In the above CircleCI config, we have used one such orb called `circleci/node` to easily install Node.js and its package manager.

We have set up the CI pipeline to build and test our application, it will first install the application dependencies and then run all our integration tests. We have also added the step to create the Docker image so we can check for our Docker image. 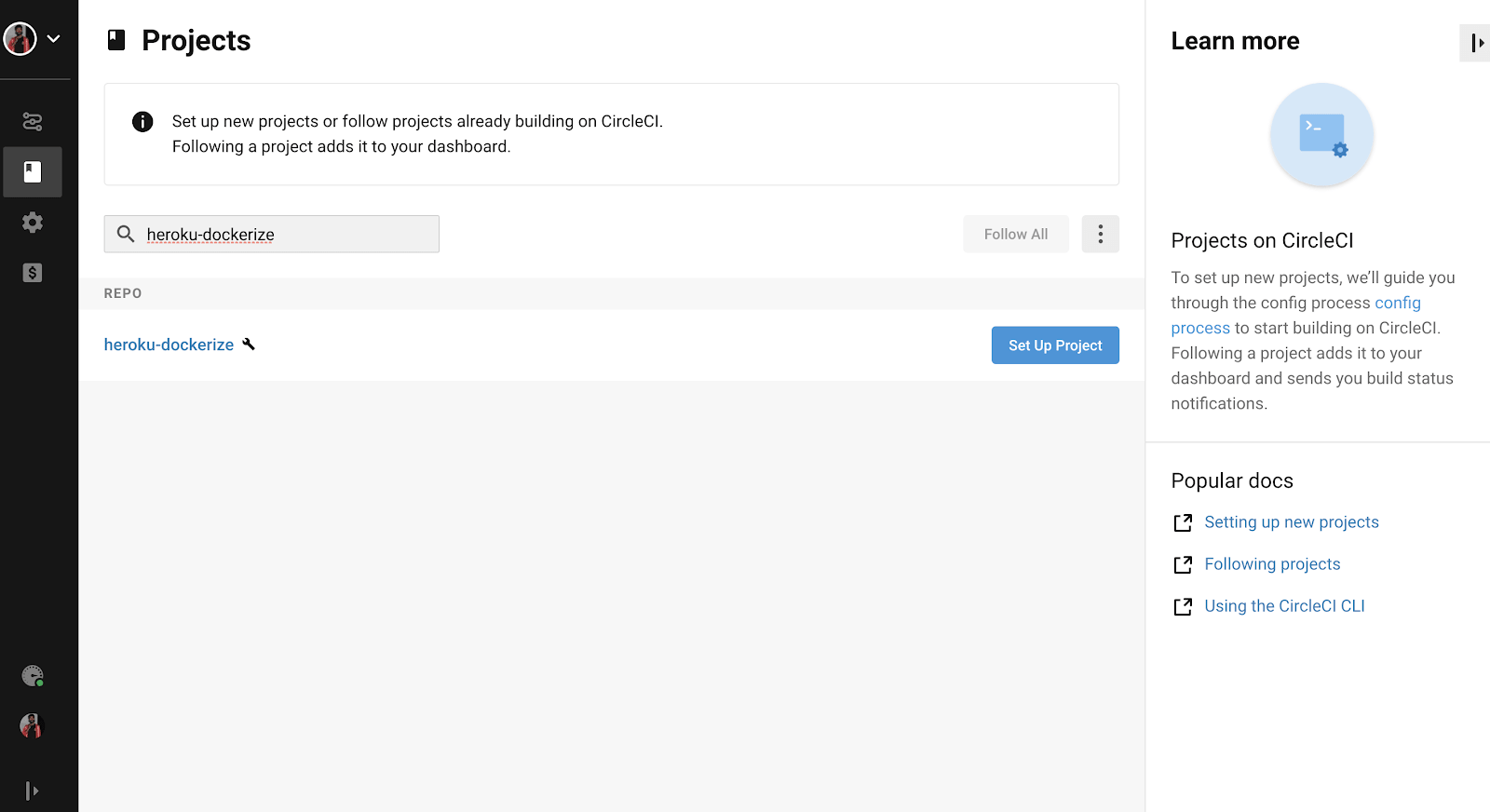 Once we click on this button, it will ask us to add a config file as shown in the image below: 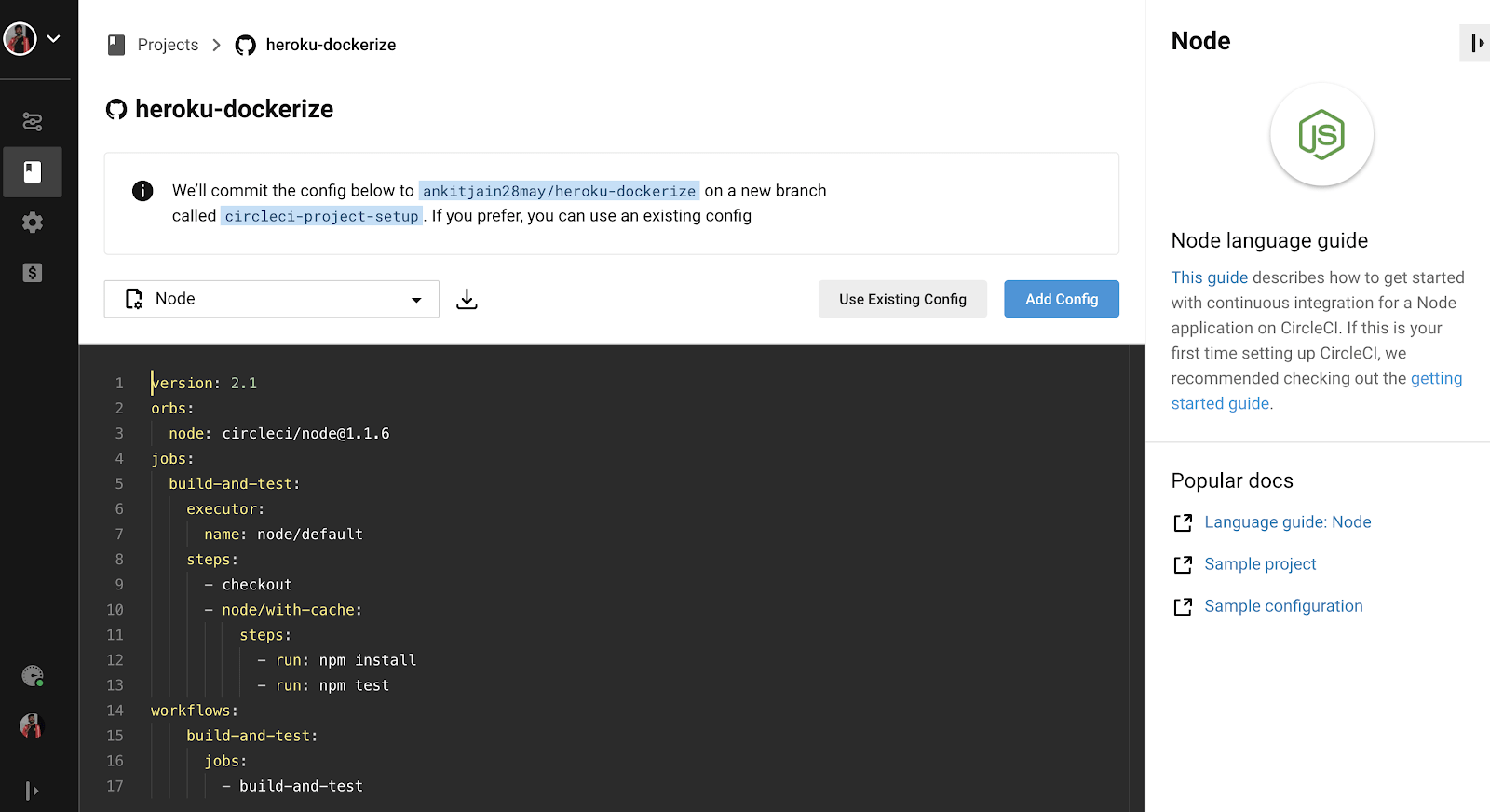 Click on the “Use Existing Config” button as we have already added the CircleCI config and click on “Start Building”. It will start the build for your Node.js application. We can also run pre-tests scripts or post-tests script simply by adding another pre/post-run field. 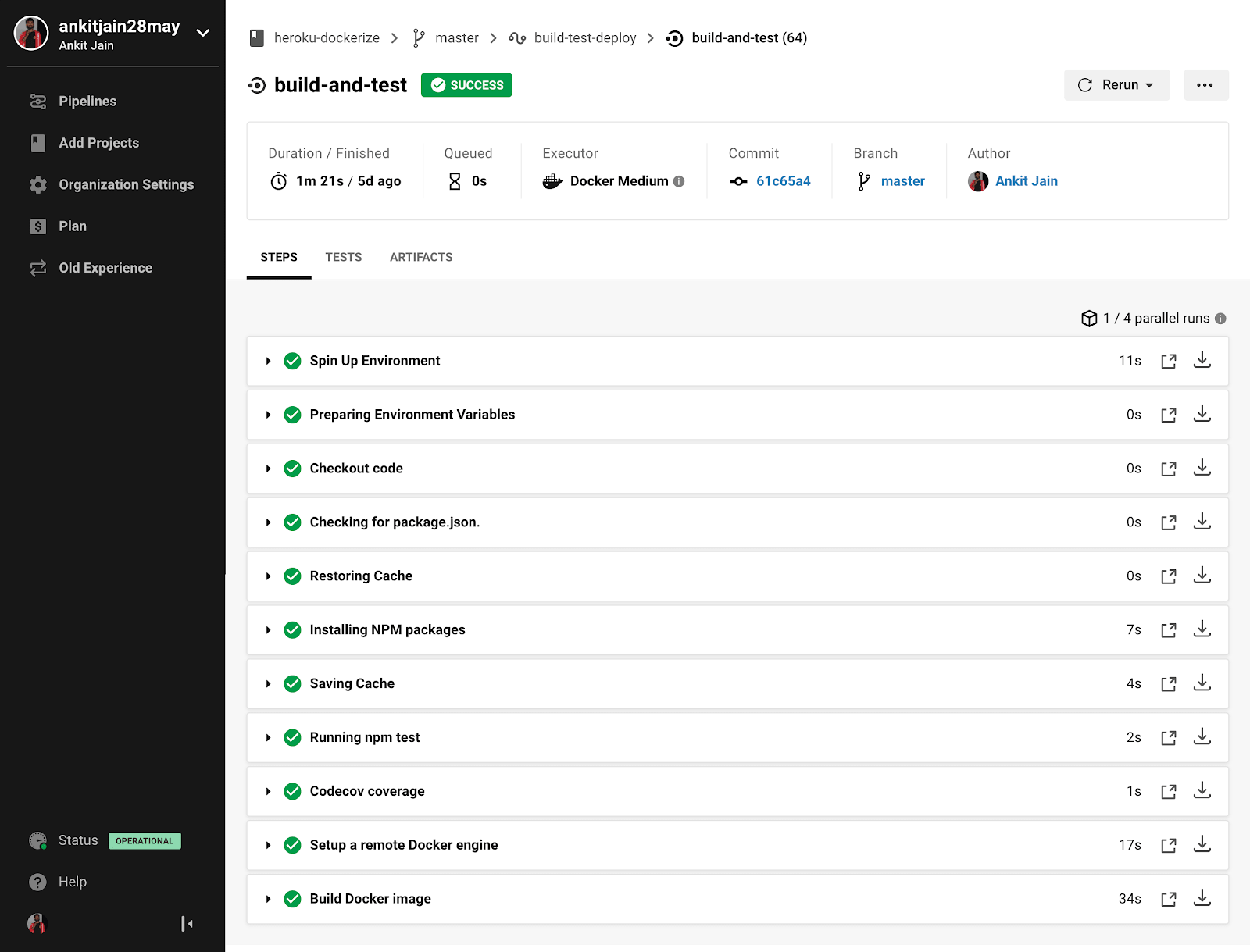 In the previous step, we have configured our CI pipeline to make the builds and run all the tests so it can be deployable to the production environment. CI pipelines help the reviewers to review the code easily as all the tests are passed. It also allows the developers to have better visibility in the application code if something breaks without being blocked at the other developers to review.

Heroku has this great feature of deploying applications directly using Git. As we can see this is being done manually by us and it’s never good to deploy our application to production environments without running proper tests and reviews. Let’s add our CD pipeline.

Before adding the pipeline, we need to authenticate the request which CircleCI makes to deploy our application on Heroku. This can be done by setting these two environment variables–

We can find the API Key under the Heroku Account Settings.

Let’s add them as Environment Variables in our CircleCI Project Settings Page as shown in the image below. 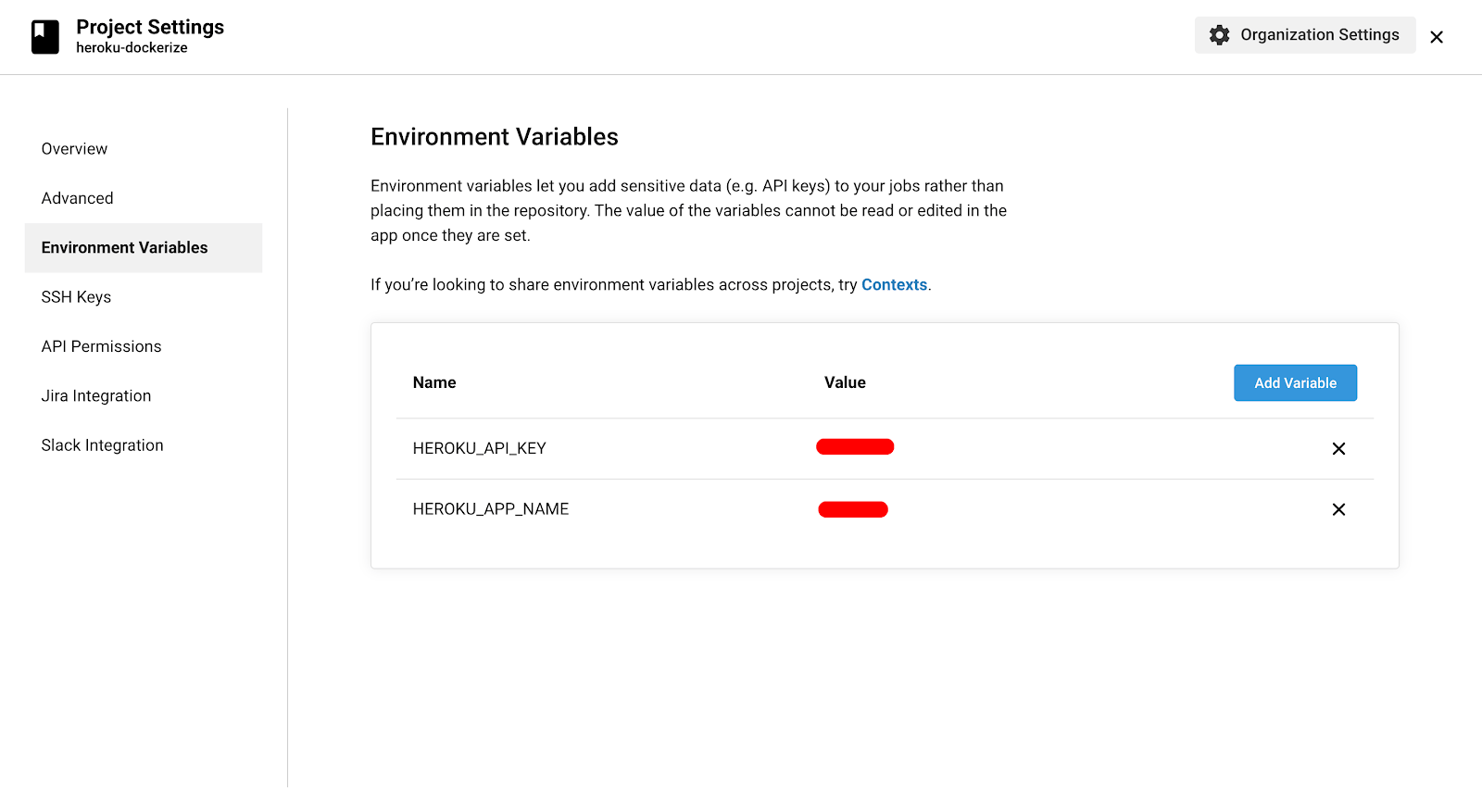 Open the `.circleci/config.yml` file and setup the deploy pipeline —

We are now using circleci/heroku orb to install Heroku CLI and deploy the application. We can also see that this orb supports the deploy-via-git command to deploy our application as we did above manually, but still, we are login to Heroku container registry and deploying our images. This is because we have run a pre-script to create a `/commit` endpoint which shows the deployed commit by rendering the data from `commit.txt` file.

Under workflows, we have made sure that our code is only deployed for the `master` branch and provided that `build-and-test` pipeline i.e our CI pipeline should be run successfully.

Let’s push our code with the Continuous Deployment configuration added to our CircleCI configuration. Our build will start to run as soon as we push. Let’s check the build–

Our pipeline is running and waiting for the CI pipeline (build-and-test) to be run successfully. Once CI pipeline is finished with success, Our CD pipeline (deploy) will run and deploy our application on Heroku. 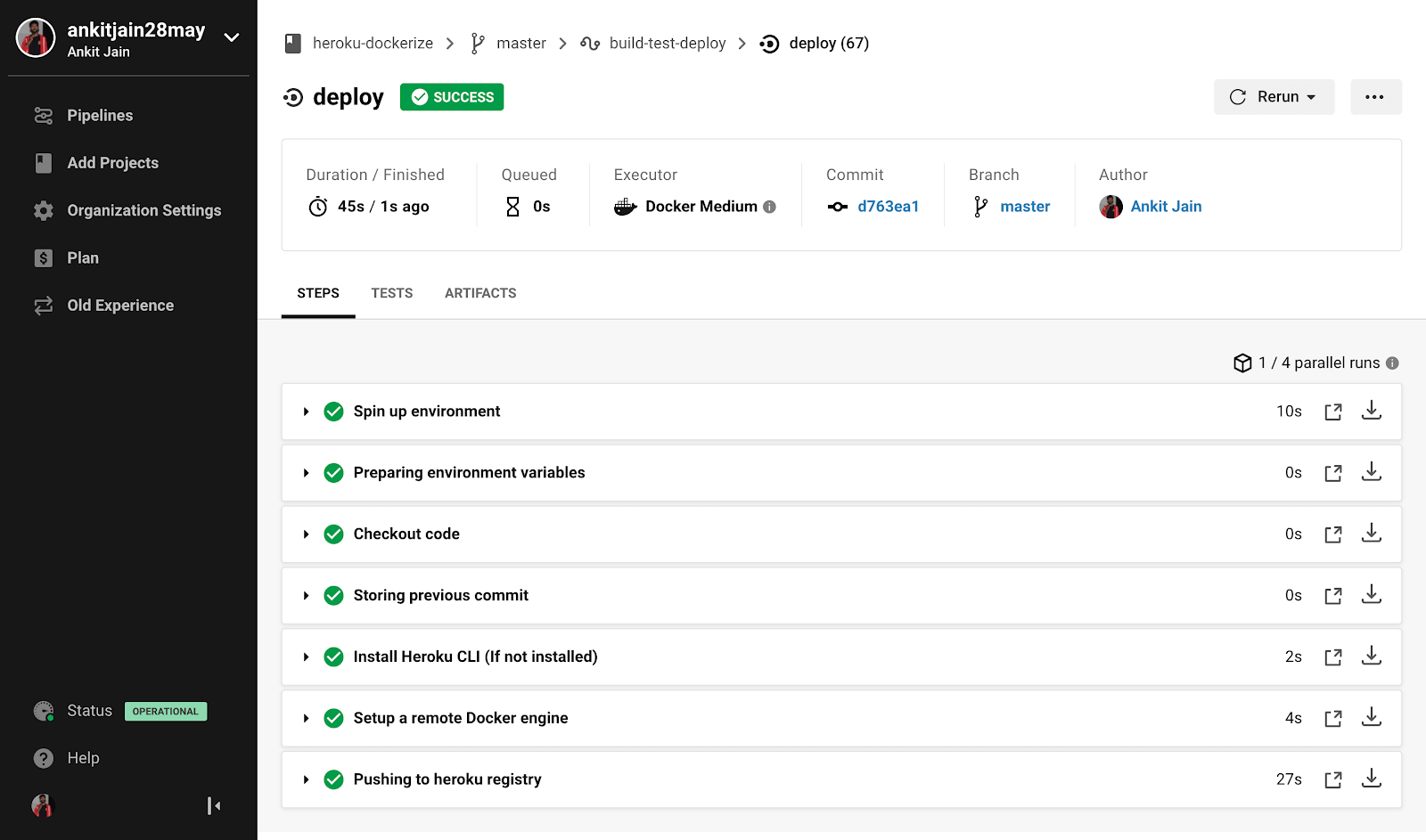 Great, Our CD pipeline is working perfectly. Let’s open our application and check for the `/commit` endpoint as well as we can also verify our application’s other endpoint like saving data to Redis as a key/value pair. Browse the application at https://heroku-dockerize.herokuapp.com

We have added the coverage and some extra tests under the `tests` branch which is merged to master now.

As we can see that it has skipped the CD pipeline (deploy) and only ran the CI pipeline (build-and-test). This is because we have defined that CD will run only for the master branch once the CI pipeline runs successfully. You can check the PR here #3

In this post, we first understand how we can dockerize our application and set up our local development environment using docker-compose. Further, we learned about the Heroku Container Runtime and how we can use it to automate the process of deploying our containerized applications to Heroku by using the Continuous Integration & Deployment pipeline. It will eventually increase the productivity of developers and help the teams to deploy their projects easily.

The code is available in this Github repo. The repo also contains the integration with Travis CI under `.travis.yml` file if anyone is willing to integrate it with Travis.