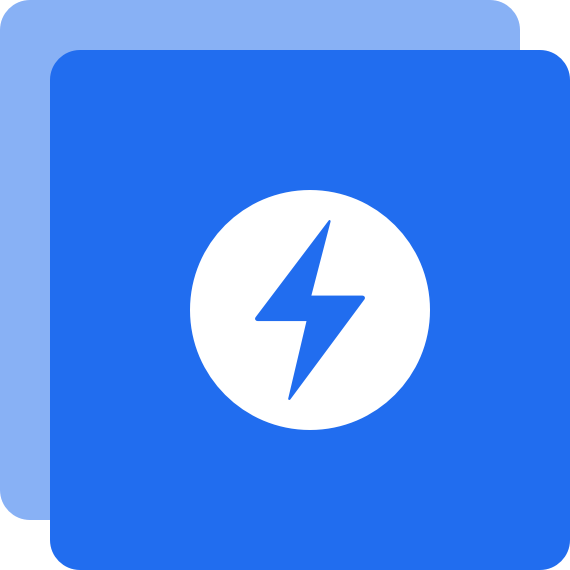 Rules help you to process, parse, and restructure log data to prepare for monitoring and analysis. Doing so can extract information of importance, structure unstructured logs, discard unnecessary parts of the logs, mask fields for compliance reasons, fix misformatted logs, block log data from being ingested based on log content, and much more.

In order to create a rule group in the Coralogix UI, go to Settings->Rules and click on the ‘NEW RULE GROUP’ button or choose one of the quick rule creation options from the boxes below. The options for rules include:

A rule group definition form has a few sections:

Each group has a name and can have an optional description.

The Rule Matcher section defines a query. Only logs that match the Rule Matcher query will be processed by the group. This is important in making sure that only intended logs go through the group rules, as well as for performance reasons.

The rule matcher query is defined by selecting a set of applications, subsystems, and severities. Only logs that fit all components of the query will be processed by the group. All entries in this section are optional. Not selecting a field or defining a RegEx means that the Rule Group will run on all of your logs. 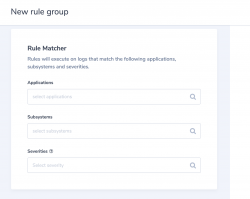 Here are the different rule types that can be created in Coralogix. 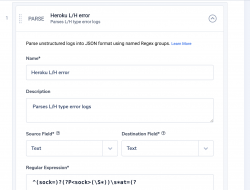 Unlike a Parse Rule, an Extract Rule will leave the original log intact and will just add fields to it at the root. The following example extracts information from the field message and creates two new fields, ‘bytes’, and ‘status’ that can be queried and visualized in Coralogix. 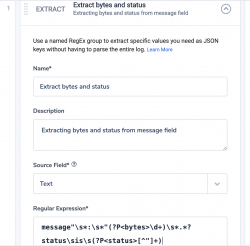 The source field is always text and the JSON Key field should contain the field name that you want to extract the value from. The destination field is the metadata field that will be overwritten with this value. This rule is frequently used to extract and set severity and to set metadata fields like ‘Category’ that influences the classification algorithms. 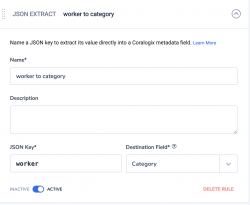 The log will not change in the Logs interface but the Coralogix metadata field ‘category’ will be populated with “A23” in the above example.

A common use case for a Replace rule is to repair misformatted JSON logs. In the following example, the JSON logs are sent with a date prefix which breaks the JSON format and turns them into unstructured logs. The following RegEx identifies the substring to replace in the log. 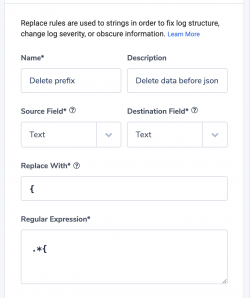 The following example shows how to use a Replace rule to rebuild a log with nested fields. Nested fields are a constraint in the Extract and Parse rules. 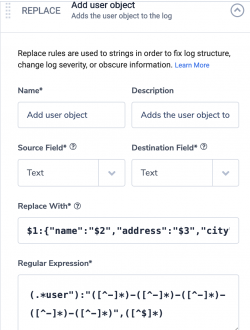 Each of the parentheses represents a capture group that can be addressed by $n n=1..7 in this case.

inner_json is a special replace rule that know how to take a field value in a json log that includes a stringified (escaped) legal json, and transform it into an object.

The field message has a string value that is an escaped legal json.

Our special replace rule will change the name of the field from the original name “message” to “inner_json”:

Identifies a field name message with the beginning of the escaped json.

The replacement string is:

Replaces only the field name and nothing else.

Block rules allow you to filter out your incoming logs. Like with other rules the heart of the rule will be a RegEx, identifying the logs to be blocked (or allowed). In this example, all the logs that have the substring ‘sql_error_code 28000’ will be blocked. 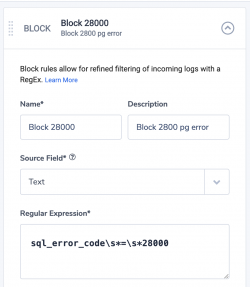 Checking the “View blocked logs in Livetail” option will block the logs but archive them to S3 (if achieving is enabled under TCO > Archive) and the logs will be visible in LiveTail. This is a more refined option to give logs a low priority, as described here. Only 15% of low priority logs volume is counted against quota.

The block logic indicates if the rule will block all logs that do match the RegEx or the inverse; all logs that do not match the regex. In our example above, checking the “block all non-matching logs” option would have blocked all logs except those that include the string sql_error_code\s*=\s*28000

The Coralogix timestamp for each log entry is assigned by our receiving endpoint when logs arrive. The Timestamp Extract rule allows you to override the Coralogix timestamp for the log entry with the value of your custom timestamp field from your log. When you are configuring this rule make sure you are choosing the right source field, then choose a field format standard you are most familiar with. Finally, you will need to edit the Time format text box with the format that matches your logs time field. After setting all three, you should use the Sample log tester and expect a match that is indicating the rule was able to parse your time field format to the Coralogix time format, which is Unix timestamps in nanoseconds divided by 100 (17 digits).

I was choosing strftime standard and set the time format to match my time field string. 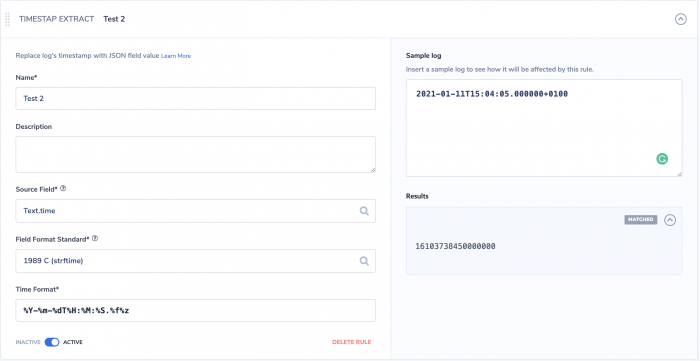 We can see it resulted in a match so we can go ahead and save this rule.

Now, I was choosing the Go time layouts standard and set the time format to match my time field string. 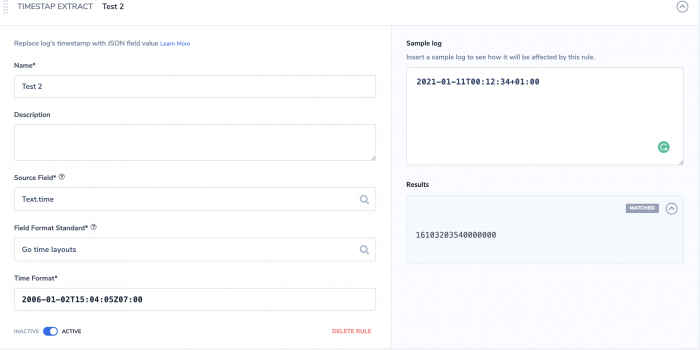 We can see it resulted in a match.

I chose again strftime standard but set the wrong time format ignoring the %z (time zone part), which resulted in no match to my time field string. We should amend the time format before saving the rule, otherwise, it will not work. 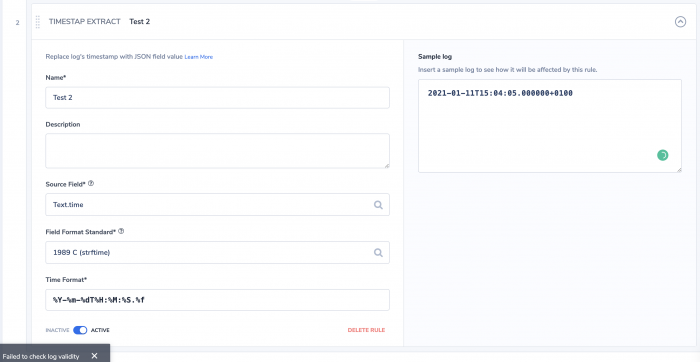 The Remove Fields rule allows you to easily drop specific fields from any JSON log entry that contains them on the Coralogix side, which is not always an option at Runtime. Thus, creating a cleaner structure for your logs to give better visibility into your data. 10% of the data volume that is being removed is counted against the quota, similar to blocked data (by a block rule).

Let’s check an example, first name your rule and give it a meaningful description.

open the Excluded fields dialog box, it will open a list of all available fields previously mapped to your indices, and choose the fields to drop. 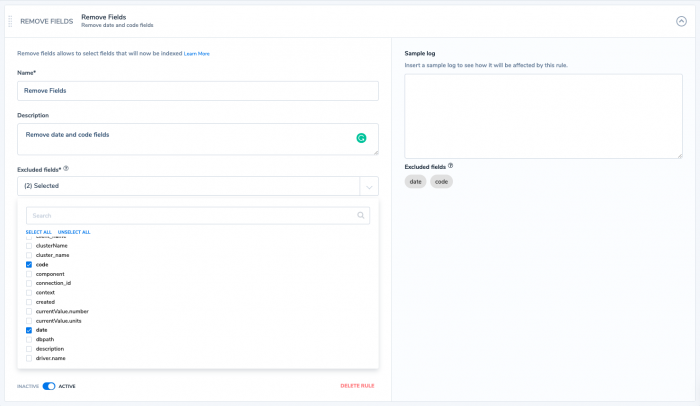 Verify your rule is working using the Sample log section.

When creating a rule you can use the ‘sample log’ area of the screen to verify your rule. Simply create or paste a log into this area and it will show you the results of the rule processing the log. In this example, a Parse rule processes the log in the “Sample log” area and the result is displayed in the “Results” area:

To add rules to a group following the creation of the first log you have to take two actions: 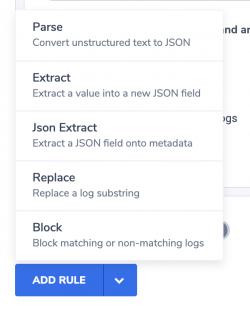 Example: Rule-1 AND Rule-2 will mean that a log will always be processed by both rules. Rule-1 OR Rule-2 means that the log will be processed by either Rule-1 or Rule-2, whichever matches first, or neither if none match the log. In other words, if Rule-1 is a match to the log, then Rule-2 will not be applied to it at all.

Logs are processed by the different Rule Groups according to the order of the groups. When “entering” a group the log is matched against the “Rule matcher” query first. If it matches, it will continue into the Group Rules. Within the group, the log will be matched against the Rules according to their order and logic. It will continue to be matched down the list of rules until it is matched by a rule that is followed by an OR logical operator. The OR and AND operators in the group do not follow the mathematical order of operations. Rules are applied instantly so that the output of one rule becomes the input of the next one.

Note: It is clear that the order of rules and groups is important and can affect a log’s processing outcome.

As an example look at these two rules that parse Heroku Postgres logs:

Another consideration is performance. The best practice is to put Block rules first and to use the ‘Rule Matcher’ when possible. It will prevent unnecessary processing of logs and speed up your data processing.

You can change the order of execution of rules within a group by dragging the rule into a new position relative to other rules. 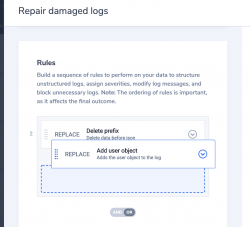 The same goes for Rule Groups. You can change their order by dragging them up and down the list.

In order to quickly find a Rule Group of interest, you can use the search function to search for rules. You can use rules or group names in the free text search field.

In order to edit a Rule Group or a Rule within a group, click on the group, make your changes, and click on ‘SAVE CHANGES’.