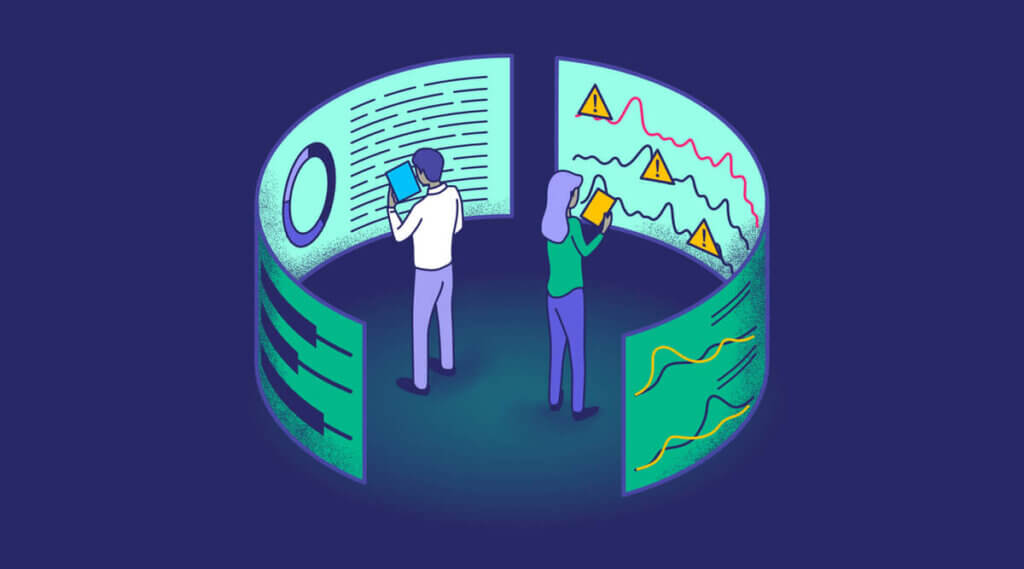 There’s no question that the last 18 months have seen a pronounced increase in the sophistication of cyber threats. The technology industry is seeing a macro effect of global events propelling ransomware and wiperware development further into the future, rendering enterprise security systems useless.

Here at Coralogix, we’re passionate about observability and security and what the former can do for the latter. We’ve previously outlined key cyber threat trends such as trojans/supply chain threats, ransomware, the hybrid cloud attack vector, insider threats, and more.

This article will revisit some of those threats and highlight new ones while showing why observability and security should be considered codependent.

Firewalls are typically configured based on a series of user-proscribed or pre-configured rules to block unauthorized network traffic.

Two types of firewalls are common in the market today: Layer 3 and Layer 7. Layer 3 firewalls typically block specific IP addresses, either from a vendor-supplied list that is automatically updated for the user or a custom-made allow/deny list. A mixture of the two is also typical, allowing customers to benefit from global intelligence on malicious IP addresses while being able to block specific addresses that have previously attempted DDoS attacks, for example.

Layer 7 firewalls are more advanced. They can analyze data entering and leaving your network at a packet level and filter the contents of those packets. Initially, this capability filters malware signatures, preventing malicious actors from disrupting or encrypting a system. Today, more organizations are using layer 7 firewalls to prevent data and ingress. This is particularly useful in protecting against data breaches, insider threats, and ransomware when data may be leaving your network.

Given that it’s best practice to have a layer 3 and a layer 7 firewall, and the amount of data generated by the latter, having an observability platform like Coralogix to collate and contextualize this data is critical.

Just a piece of the puzzle

Given that a firewall is just one tool in a security team’s arsenal, it’s essential to be able to correlate events at a firewall level with other system events, such as database failures, malware detection, or data egress. Fortunately, Coralogix ingests firewall logs and metrics using either Logstash or its own syslog agent, which means that it can work with a wide variety of firewalls. Additionally, Coralogix’s advanced log parsing and visualization technologies allow security teams to overlay firewall events with other security metrics simply. Coralogix also provides some bespoke integrations to a number of the most popular firewalls.

Firewall data in isolation isn’t that helpful. It can tell you what malicious traffic you’ve successfully blocked, but not what you’ve missed. That’s why adding context from other security tools is vital.

As mentioned above, if firewalls are the first defense, then intrusion detection systems are next in line. Intrusion detection is key because it can tell you the nature of the threat that’s breached your system and highlight what your firewall might have missed. Remember, a firewall will only be able to tell you what didn’t get in or what was let in.

By layering intrusion detection data, like that from Suricata, your SRE or security team will be able to detect attacks and identify the point of entry. Such context is vital in reengineering cyber defenses after an attack.

55% of Kubernetes deployments are slowed down due to security concerns, says a recent Red Hat survey. The same study says that 93% of respondents experienced some sort of security incident in a Kubernetes environment over the last year.

Those two statistics tell you everything you need to know. Kubernetes security is important. Monitoring Kubernetes is vital to maintaining cluster security, as we will explore below.

By default, there is no configured network security rule which permits pods to communicate with each other. Pod security is heavily defined by role-based access control (RBAC). It’s possible to monitor the security permissions assigned to a given user to ensure there isn’t over-provisioning of access.

A common attack vector to a Kubernetes cluster is via the containerized application itself. By monitoring the host level or IP requests, you can limit your vulnerability to DDOS attacks, which would otherwise take the cluster offline. Using Prometheus for operational monitoring is a good way of picking up vital metrics from containerized environments.

A container’s runtime metrics will give you a good idea of whether it’s also running a secondary, malicious process. Runtime metrics to look out for include network connections, endpoints, and audit logs. By monitoring these metrics and using an ML-powered log analyzer, such as Loggregation, you can spot any anomalies which may indicate malicious activity.

With Kubernetes, several off-the-shelf security products may aid a more secure deployment. However, as you can see above, there is no substitute for effective monitoring for Kubernetes security.

It should be abundantly clear why an effective observability strategy for your network traffic is critical. On top of the fundamentals discussed so far, Coralogix has many bespoke integrations designed to assist your network security and observability.

Zeek is an open-source network monitoring tool designed to enhance security through open-source and community participation. You can ship Zeek logs to Coralogix via Filebeat so that every time Zeek performs a scan, results are pushed to a single dashboard overlaid with other network metrics.

Organizations around the world use Cloudflare for DDOS and other network security protection. However, your network is only as secure as the tools you use to secure it. Using the Coralogix audit log integration for Cloudflare, you can ensure that access to Cloudflare is monitored and any changes are flagged in a network security dashboard.

Coralogix has built a traffic analyzer specifically for monitoring the security of your AWS infrastructure. The Security Traffic Analyzer connects directly to your AWS environment and collates information from numerous AWS services, including network load balancers and VPC traffic.

Often overlooked, application-level security is more important than ever. With zero-day exploits like Log4j becoming more and more common, having a robust approach to security from the code level up is vital. You guessed it, though – observability can help.

To the edge, and beyond

Edge computing and serverless infrastructure are just two examples of the growing complexities you must consider with application-level security. Running applications on the edge can generate vast amounts of data, requiring advanced observability solutions to identify anomalies. Equally, serverless applications can lead to security and IAM issues, which have been the causes of some of the world’s biggest data breaches.

In the world of hybrid cloud, observability and security are closely intertwined. The complexities of running systems in a mixture of on-premise and cloud environments give malicious actors, and your own security teams, a lot to work with.

It’s unlikely that the security tooling for your cloud environments will be the same as that used on-premise. Across different systems, vendors will likely have different security tools, all with varied log outputs. A single repository for these outputs, which will also parse them in a standardized fashion, is a key part of effective defense. Without this, your security teams may be spending unnecessary time decrypting the nuances in two different products’ logs, trying to find a connection.

A single pane of glass is the only way to implement observability in a complex environment. Dashboards help spot trends and identify outliers, making sure that two teams with different perspectives are “singing from the same hymn sheet. Combine effective dashboarding with holistic data collection, and you’re onto a winner.

At Coralogix, we firmly believe that the most important tool in your security arsenal is effective monitoring and observability. But it’s not just effectiveness that’s key, but also pragmatism. We firmly believe in the value of collecting holistic data, such as from Slack and PagerDuty, to tackle security incidents as well as to detect them.

The bulk of this piece has been regarding how observability can help detect malicious actors and security incidents. Our breadth of out-of-the-box integrations and the openness of our platform give organizations free rein to build security-centered SIEM tools. However, by analyzing otherwise overlooked data, such as from internal communications, website information, and marketing data, in conjunction with traditionally monitored metrics, you can really supercharge your defense and response.

Hopefully, you can see that security and observability are no longer separate concepts. As companies exploit increasingly complex technologies, generate more data, and deploy more applications, observability and security become bywords for one another. However, for your observability strategy to become part of your security strategy, you need the right platform. That platform will collate logs for you automatically while highlighting anomalies, integrate with every security tool in your arsenal and contextualize their data into one dashboard, and bring your engineers together to combat the technical threats facing your organization.

Observability and Cyber Resiliency – What Do You Need To Know?