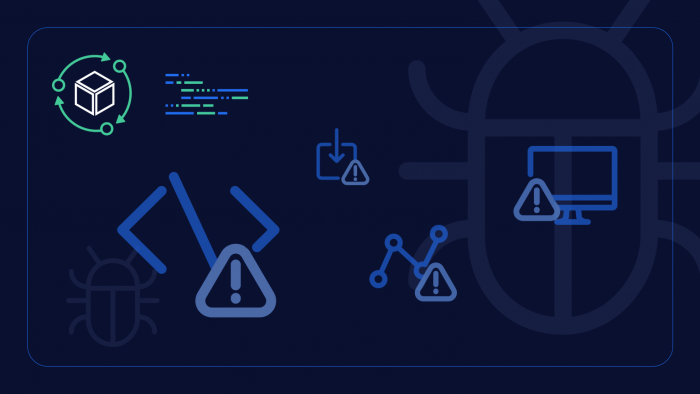 Log files are infamous for being “noisy”. Without the right management solution, trying to find a specific piece of information or using them to reproduce a critical error is a complex undertaking. If you’re working with CI/CD, how do you attribute new errors to a particular release? How do you investigate those errors and make sure that your customers aren’t being impacted?

Faster releases mean shorter development and testing cycles before new code reaches production. On top of that, users are only increasing their expectations for high-quality user experiences. Staying on top of newly introduced errors is absolutely critical to achieving that goal.

In this post, we’ll take a closer look at why new errors are so important to track.

Errors can impact users and affect your business, but not every error needs to be addressed right away. A lot of what shows up in the log files is just noise – non-relevant data and familiar, low priority errors. Being able to separate the signal from the noise allows teams to focus their efforts on what really matters.

We need to identify new errors and prioritize them by severity. Those which risk downtime or significantly affect user experience should be handled immediately. We can add less critical bugs to the backlog. Engineers can then monitor for anomalies which could also be the effect of code changes.

Monitoring for new errors and critical anomalies is especially important. To resolve issues before they reach users, we need to to quickly identify when a particular release introduces new errors. This process needs to be instant, in order to keep up.

Keeping up with CI/CD

When things are constantly changing in your environments, it makes it even more difficult to track which errors are new, which are occurring with higher-than-usual frequency and which are legacy errors that have been around for a while and aren’t a high priority.

CI/CD workflows have much higher frequency releases than what we used to see in traditional software development lifecycles. In a modern software office, we do not release code once a year. Weekly, daily and ad-hoc releases are becoming the new normal.

This means shortened development and testing cycles. Even without this increased pressure to deliver new code, errors inevitably reach production environments. There’s simply no way to test for every possible situation, and errors are bound to occur. Now, with CI/CD, these same issues are being introduced at an accelerated rate.

When we deploy a faulty version, it’s important to know immediately so we can resolve them. Part of that might include correlating your logs with the release that introduced them as this can shorten the time it takes to identify the root cause of the error and to resolve it.

The Risks of Falling Behind your CI/CD process

The last thing you want is for your customers to be the ones telling you that something’s wrong with your application. With CI/CD workflows, the risks of a new release introducing errors are higher, but our customers still expect the same high-quality performance.

The effects of a faulty release can range from relatively benign bugs causing slight loading delays to system failure or downtime. Either way, the potential fallout from these issues can damage the company’s reputation. Reputation damage ultimately hits us where it hurts. The bottom line.

In order to prevent new errors and critical anomalies from affecting customers, you need the ability to identify them as soon as they appear and prioritize them for resolution. Let’s see how Coralogix can help with that.

Using the ability to organize logs by their original template, Coralogix is able to automatically alert users on new errors that haven’t occurred before or critical anomalies of logs that are occurring in their system.

Only 5 days after connecting Coralogix, the tool uses Machine Learning to understand the logging system and starts to send a daily digest outlining all new and critical logs for the previous two weeks, along with a list of the top 10 errors from the past day.

This feature is most commonly used by our customers right after a deployment to verify that the release didn’t introduce any new errors, exceptions or critical logs. For those with CI/CD release cycles, this feature helps ensure that new errors are identified immediately and don’t cause issues for their users or delays in the product roadmap.

All it takes to ensure release quality is to wait for the daily digest email to get a better understanding of the deployment status. From the email, users can enter the Coralogix system and view the high priority logs one by one or in aggregate with Coralogix’s Loggregation©.